Reminiscences of an adventurous career in human spaceflight

A public lecture was made by Dr Kass at his alma mater of his first university degree, on his exciting career in human spaceflight. He was invited on the occasion of the Concordia Univesity’s Summer Research Institute, whose theme for 2015 was Space.

Back in 1962 when James Kass first registered at the university in the department of physics, it was then known as Sir George Williams University. Kass recounted how in those early days of human spaceflight, Yuri Gagarin had just made a world first by hurtling into orbit aboard Vostok 1 in 1961, and John Glenn had followed shortly after. Only a few short years earlier, in 1958, the first man-made satellite, Sputnik, had been successfully launched into orbit. This was an exciting time, and Kass knew what he wanted to do professionally, he wanted to work in human spaceflight. 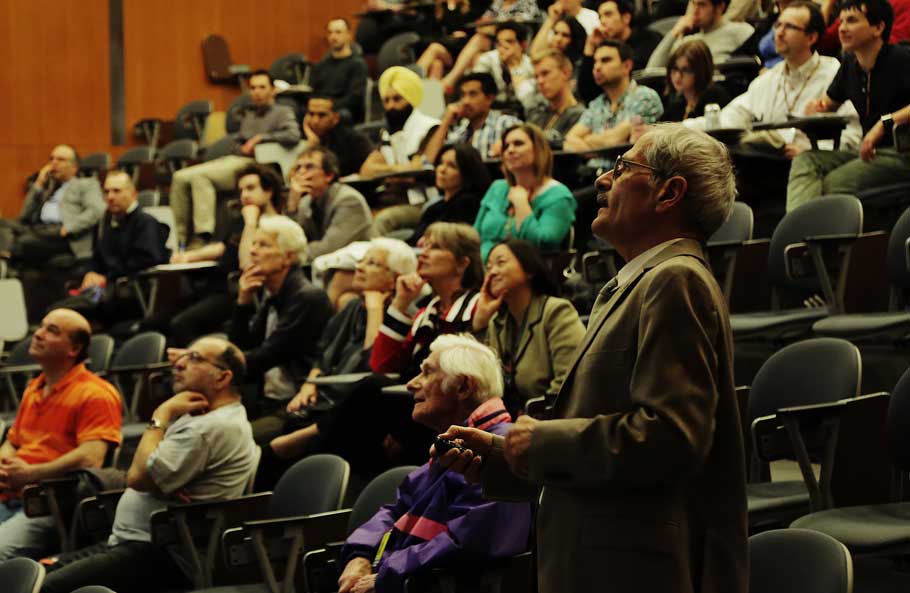 On being prompted by the professor who was handling his registration at the university as to what he wished to do in life and to imagine an interesting slice of his work telescoped 20 years into the future, he recounted his dream to the somewhat bemused professor, who advised him to launch his career in physics and mathematics.

James immersed himself with gusto and dedication to study two of what were considered to be the most challenging subjects offered, successfully completing his BSc in Physics and Mathematics at the university. He followed on with a Master’s degree at the University of Michigan in Ann Arbor, Mich, USA and then a PhD at the University of Leeds in England.

Although his doctoral research and first post-doctoral research fellowship dwelt deeply in the study of elementary particles and nuclear physics, he quickly switched to the totally different domain of Neurophysiology, which took him into the pioneering circle of scientists working together on the first Spacelab mission, launched into space on one of the earliest Space Shuttle missions. This was to be the mission fulfilling his long-ago dream, almost to the letter and almost exactly 20 year later!

In his speech he recounted how all this happened, giving also an historical perspective to the early days of spaceflight and earlier dreamers, who had inspired him and their successors, such as Jules Verne, Konstantin Tsiolkovskiy, Sergei Koroliev, Hermann Oberth, Robert Goddard, and Wernher von Braun.

Some 200 people attended the presentation, which was followed by a lively Q&A and then a delicious reception put on by the university in honour of this special occasion.

Kass followed the public presentation with an intimate and lively session with the students of the summer institute. Themes of discussion varied from human spaceflight, the fulfilment of dreams, to the art of pedagogy at schools and universities. Kass was critical about methods of teaching at schools, going from bad to worse in most cases at universities where academic staff suffered from the self-imposed plague of publish-or-perish, where academic teaching is seen as a necessary evil by staff who are under pressure to publish as frequently as possible in order to make the grade. Moreover, the entire teaching profession is geared towards preparing students for exams, whose grades will mark them for life rather than play a facilitative role towards identifying areas of weakness that need strengthening. The allotted time passed quickly and the students continued with their questions to Dr Kass even after the session, in the corridors, their enthusiasm unabated.

Links to the recorded speech, as well as to other related news blog on the event, and radio interview, are provided below:

- Link to video of speech “Reminiscences of an adventurous career in human spaceflight”.

- Link to blog “Walking at 0-gravity down memory lane with Dr James Kass".