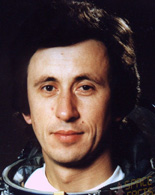 Dr Oleg Yurivitch Atkov (Олег Юрьевич Атьков) is a cardiologist, professor, expert on telemedicine and doctor-cosmonaut of the Soviet Union. In 1984 Atkov flew on the Soyuz to the space station Salyut-7, where he remained in orbit for 237 days, a record for that time. Atkov assisted Kass on a few assignments that he was managing on behalf of OHB-System under contract to the European Space Agency. The first of these projects was a study on “Columbus Crew On-Board Tasks”, for which Kass was project leader; another project was a study of Soviet crew training and methodology. Atkov is currently vice-president of JSC " Russian Railways "on health care and working with community organizations.