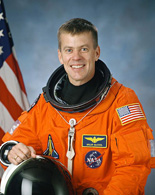 William "Willie" McCool was a United States Navy Commander, test pilot, NASA astronaut, and the pilot of Space Shuttle Columbia mission STS-107. This Shuttle mission, his first and only mission into space, being one of the seven crew killed as Columbia disintegrated during re-entry to the Earth. Dr Kass was a member of the ESA team who trained the STS-107 crew to operate the Biopack facility, a compact biological experiment facility that flew with this mission.

Willie was amongst the crew assigned as primary operators for the Biopack facility, and assumed very dedicated responsibility to keep the facility running properly despite technical difficulties.