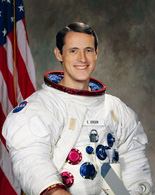 Dr Edward Gibson is a pilot, engineer, physicist and former astronaut for NASA. When he was selected to join the NASA astronaut corps he was in the first group of scientist-astronauts. Gibson made his first and only flight into space as science pilot aboard Skylab 4 (1973), on a mission lasting 84 days. Gibson retired from NASA in 1982 to work for TRW, which he left in 1990, to begin his own consulting firm, Gibson International Corp. One of his first assignments was to work for OHB-System, Bremen, where he assisted Dr Kass on a few assignments for the European Space Agency.

The first assignment was a study on “Columbus Crew On-Board Tasks”, for which Kass was project leader. Some other studies on which he assisted included one on automation and tele-operation in manned spaceflight, and a study on the need for aircraft training for scientist-astronauts who fly as payload specialists.