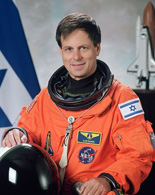 Colonel Ilan Ramon was a fighter pilot for the Israeli Air Force (IAF) and the first Israeli astronaut, who flew on the Space Shuttle (STS-107, 2003) representing the Israeli Space Agency. Dr Kass was a member of the ESA team who trained the Space Shuttle Columbia STS-107 crew to operate the Biopack facility, which flew with this mission and was housed in the Shuttle’s middeck. This mission unfortunately ended in disaster when the craft disintegrated after re-entry into the Earth's atmosphere, killing Ilan and his fellow crew.