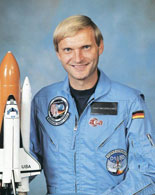 Professor Dr Ernst Messerschmid, a German physicist, engineer, academic, and astronaut, was one of the astronauts on the first German Spacelab mission D-1 (STS-61-A, 1985). Amongst the many experiments he operated on this mission, he was trained by a team led by Dr Kass to perform a series of vestibular experiments on the Space Sled using the Vestibular Helmet. After this mission he followed a stellar career in academia, becoming Dean of Aerospace Faculty, and later, Vice-President, of Stuttgart University, Germany. He also served for five years as Head of the European Astronaut Centre (EAC), in Cologne, Germany.