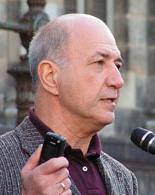 Professor Dr Ockels, first astronaut from the Netherlands, is a retired member of the first team of astronauts selected to join the European Space Agency Astronaut Corps. He is also a nuclear physicist and professor at the University of Delft. He was one of the team of three European astronauts who flew on the German D1 Spacelab mission (STS-61-A, 1985). Amongst the experiments he operated on this mission, he was trained by a team led by Dr Kass to perform a series of vestibular experiments on the Space Sled using the Vestibular Helmet.