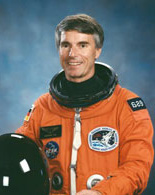 Dr Merbold is the first West German citizen and second German native (second German after after Sigmund Jähn) to have flown in space. He is also the first member of the European Space Agency Astronaut Corps to participate in a spaceflight mission, and holds the distinction of being the first non-US citizen to fly into orbit in a US spacecraft. Merbold’s first flight was on the Space Shuttle in conjunction with the first flight of the European Spacelab (STS-9, 1983). For this mission, he was trained to perform a long series of neuro-physiological experiments by a team of scientists lead by Dr Kass.

This training was first carried out at the Joh. Gutenberg University, Mainz, where Dr Kass was a research fellow tasked to organize the preparation, crew procedures, and crew training for these experiments. The training continued at Marshall Space Flight Centre (Hunstville, Alabama), where NASA built a weightlessness simulator after Kass’s design used in Mainz. Pre-mission baseline data collection on the crew was carried out in at Kennedy Space Centre (KSC, Cape Canaveral) while first post-mission data collection was carried out at Dryden Flight Research Centre where the Shuttle carrying Spacelab landed. Dr Kass also communicated directly with Ulf Merbold in orbit in order to direct the operations of the long and complex experiments.

After this mission he flew on the Space Shuttle for the First International Microgravity Mission (IML-1, STS-42, 1992). His final flight was on the Soyuz to MIR space station (1994), becoming the first ESA astronaut to fly into space with Russia, on board Soyuz.