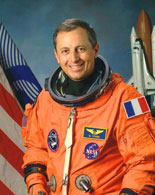 Brigadier General Michel Tognini was a qualified test and fighter pilot in the French Air Force, and a former CNES and ESA astronaut who also served as Head of the European Astronaut Centre (EAC), of the European Space Agency. Tognini served on two space missions, one on the MIR station on the Antares mission (1992), and the second on the Shuttle mission (STS-93, 1999) with the deployment of the Chandra X-Ray Observatory. He supported ESA’s Hermes program in Toulouse, participating with the Hermes Spaceplane Cockpit Working Group – HSCWG, which was co-managed by Dr Kass.

Their paths crossed again when Dr Kass represented the European Space Agency in a working group organized by the NSBRI on Multicultural and International Issues in Space-Flight Research and Health Care, in which Michel Tognini also participated. And finally, during the period of Mr Tognini’s tenure at the EAC, Dr Kass worked in ESA’s human spaceflight commercialization division, which was part of this department.