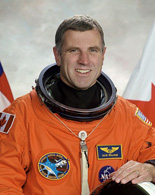 Dr "Dave" Williams is a Canadian physician and a retired CSA astronaut. HE flew on two Space Shutttle missions, STS-90, a 16-day mission (Columbia, 1998) and STS-118 (Endeavour, 2007) to the International Space Station, where he performed three spacewalks. He also held the position of Director of the Space and Life Sciences Directorate at NASA’s Johnson Space Center. In 1994, he was a member of the crew for the CAPSULS mission, for which Dr Kass was a co-investigator on a series of group-dynamics experiments.